Friday and Saturday I had rest days – and amazing they were too!  Nice dinner with the hubby Saturday night – healthy choice of salmon whilst I dribbled slightly at the burger that was served to the table across the room.  Then I sulked as there were no “good” choices on the dessert menu but I quickly recovered after we stopped for frozen yoghurt – yum!

So yesterday my husband and I got up early (should be against the law on a Sunday but I am getting used to it being the norm) and headed up to Embankment for the Winter Run 10k.  It was freezing – even once we got on the train and we just kept smiling at each other when I think we were both thinking its not too late to go home in the warm! 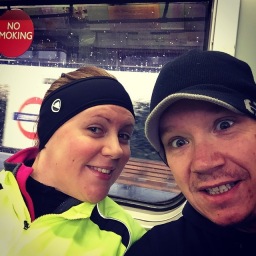 According to the website there were going to be 1,600 people set off in every 8 minute wave – we were expecting a bit of a nightmare if I am honest.  Bag drop was fine – in and out really quickly and then we started queuing, after a quick photo with a polar bear of course!

It was a slow start as you had to queue and then they set off some then wait for the next wave and so on.  It was also really emotional!  Really, really, emotional!  The whole event was for Cancer Research and they were asking people to put their hands up if they knew anyone who had been affected by cancer and as you can guess most people put their hands up.  Then they asked if anyone had personally been affected by cancer and there were a lot of hands.  Lastly they asked if there was anyone there who was still battling cancer and there were quite a few hands go in the air.  You would have to have a swinging brick where your heart should be not to be amazed at the strength of these people – complete admiration for them!  And there was me nervous about finishing and being overtaken – shame on me all I had to do was drag my fat ass round 10k!

So our wave finally started moving – it took a long time and I needed the loo again! I was determined not to go off too quickly but there was no fear of that as the first 5 minutes at least were at walking pace because of the large group of people.  Then we started to spread and could go at our own pace.  There was a lot of dodging people as these events cater for people of all abilities so it is a mixed crowd, which is nice as a lot of the running events I have done I always feel like the slowest person there and like I don’t quite fit in.  There was so much support on the route as well – loads of people who had come out to cheer you on and little kids holding out their hands for hi fives!  There were fake snow machines and teams of motivators along the way cheering encouragement.

We finished it – and I got a pb for my 5k (31 minutes 44 seconds) and a pb for my 10k (1 hour 4 minutes and 37 seconds) and we got a really pretty medal too!  Massive thanks of course to my husband who ran with me for the whole thing – even if he wouldn’t let me stop to walk and I nearly wet myself! 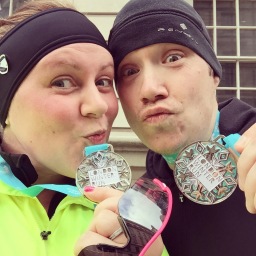 I did have a nosey at the other times people finished it in and was surprised as I always assume I am one of the slowest:

However, I found there were a lot of people finishing around the same time so I think maybe I will stop beating myself up quite so much! Instead I shall run by this logic ha ha:

Yesterday was made even better as I saw a friend from school and she had read my blog, another friend put on facebook about their new favourite thing being frozen grapes, which they had got from my blog and the cycling club I am part of retweeted one of my posts with the hashtag thisgirlcan (love it) so I am chuffed people are actually reading my ramblings!

Last but not least of course it is Monday (meh) and so that is also weigh-in day for me too – and a good one as I lost another 3 pounds! You can’t see but I am grinning!

So I shall be keeping all of this up and later today will go for another run! 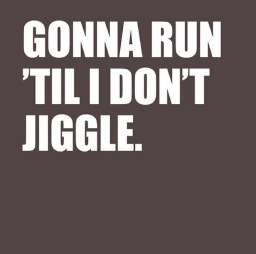