I knew of the bike week held in Motala from a friend who lives there.  My husband had been out to take part in the Vatternrundan bike ride previously so I knew what it was about and at the time thought about going back to take part myself, which I did in 2017.  I wrote a blog post about it that you can read here.

So what happens during this week?  There is really something for everyone and here was the schedule for this year: 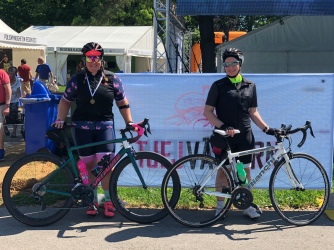 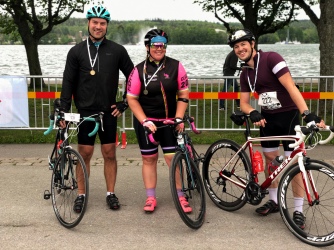 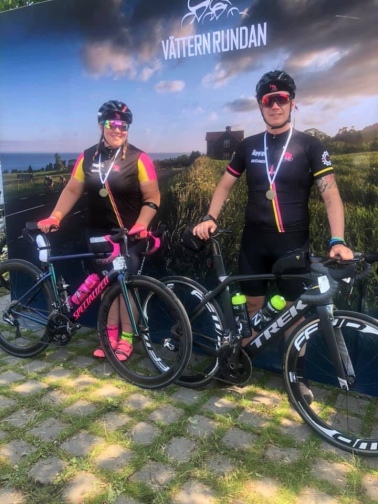 The roads are perfect, scenery stunning and although the roads are open there is relatively little traffic on the course.  My husband was talking about this early on in the ride and then managed to hit possibly the only pot hole in Sweden.  We also laughed as there are signs in places to watch out for a certain animal – a moose!  My husband joked that it would be ironic to be hit by a moose whilst on a bike when our cycling club logo is a moose cycling on a bike!

Blueberry soup is served warm at the rest stops.  The first time I came across this in Sweden I was not sure if it was for me but this stuff is magic.  Warm and works a treat in the cold of the night and sweet – might try and make some of this myself now I am back in the UK.  Enervit is the main nutrition provider with energy drinks available as well as water at rest stops.  Most stops have the famous sweet buns with the last stop in Medevi having honey covered buns which are a hit for most.  Other food you will find are salty gherkins, mashed potato and meatballs at Jonkoping, lasagne at Hjo and for those that want breakfast instead you will find porridge.

Other things you will find at the rest stops are massages and mechanics on hand to help.  You have to carry all your kit, nutrition, clothes etc and if you need assistance at the rest stops you can get what you need and will receive the receipt to pay for items after the race like inner tubes etc.

It is always amazing to see the veteran participants on the course.  A veteran is someone who has completed the ride 25 times or more.  We met this man who was 84 years old and this was his 41st time doing the Vatternrundan 300km bike ride.  He was explaining to us that he believes people should try and spend as much time outside and be fit and healthy and stay active.  He also commended us on taking part in the event for the second time and said that if I were to also complete the ride 41 times like him to look him up and he will ride it with me.  I should also note that this man then set off on his very modest bike fitted with fur leopard print covered saddle.

This is a great week and Sweden is really somewhere that has captured my heart.  I would absolutely recommend taking a look at one of these events for sure and I know for sure I will be back again!

A lot of people say it is such a long way and it is but you break it down – ten 30km rides or rest stop to rest stop or three 100km rides – however you want to do it but it makes it a lot easier.  The only thing is the signs on the ride count you down which is fab for the Tjejvattern and Halvvattern but on the Vatternrundan when you see the sign saying 290km or 280km it can seem daunting but when you get to a milestone like 200km left you know you are a third of the way through or 150km and you are halfway there and when you see that last 10km left its an amazing feeling!

Was I nervous?  Absolutely!  Even though I had done it before – nerves are totally normal and shows you care.  This time round I would also have the miles in my legs from cycling around Sweden and also from the first two events, both of which included the climb up Omberg and I was unsure how that would affect me. Pacing is the hardest for such a distance – it’s difficult to always know how much to push early on so you won’t suffer later in the ride. I got to 270km or therabouts feeling good and found every slight incline in the final 30km a little tough and that for me was when mental toughness needed to come in in order to find some fuel in an otherwise empty tank.  It is mental strength that will help alongside physical strength in endurance events like the Vatternrundan and it could be true when they say physical strength will get you to the start line but mental strength will get you to the finish line. It was interesting though as we had decided this time to ride and enjoy the experience and looking at Strava my ride time average speed I was 0.1 mph slower but it felt so much more comfortable.

If you ride a bike and are looking for an event abroad take a moment to look at these events – registration is already open for interest and you need to complete that in order to following the next stages and get a potential place next year – you won’t regret it!

2 thoughts on “What is the bike week in Motala, Sweden?”